The eel (Anguilla anguilla) is a catadromous fish that lives largely in freshwater and migrates to the sea to spawn. In the Netherlands, migration towards the sea peaks in the autumn during periods with high water discharge. Reproduction takes place 6,000 km away in the Sargasso Sea in the North Atlantic Ocean.

The leaf-shaped Leptocephalus larvae then migrate with ocean currents back towards the European continental shelf. Here the larvae metamorphose into elvers, after which they enter freshwater and take on a new, major challenge in their lives. After all, humans have closed almost all accesses to our inland waterways with dykes, sluices, locks and pumping stations. Nevertheless, the urge to migrate drives the eels forward as they continue to migrate upstream until they return to their native areas. 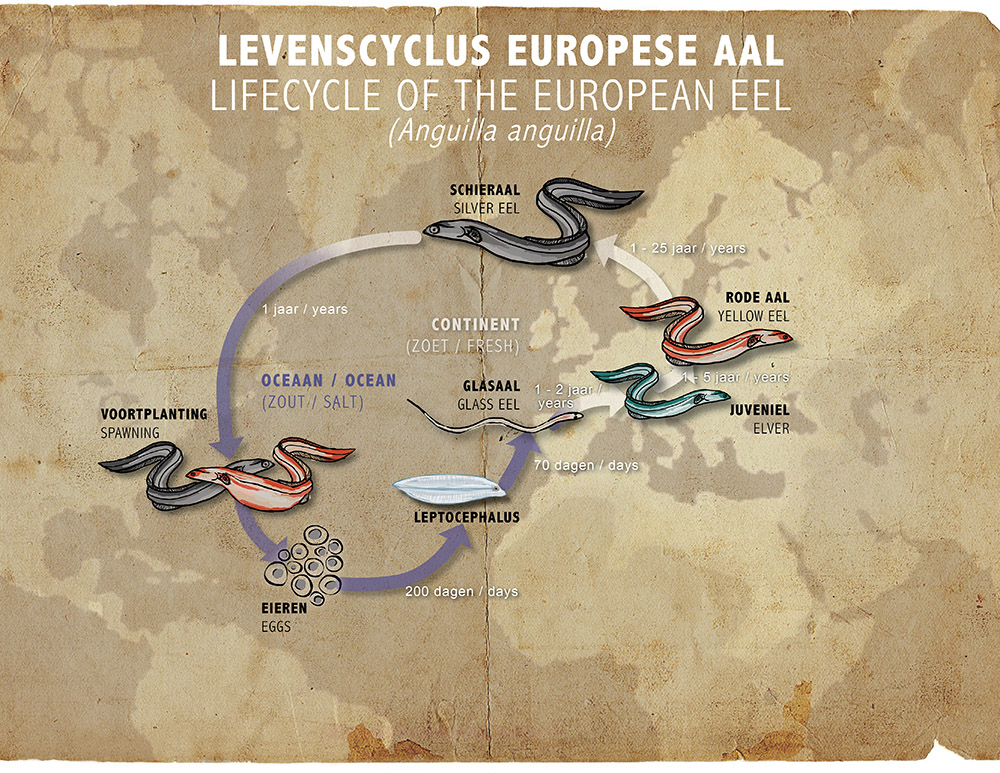 Since the second half of the 20th century, the species has declined sharply, and elver migration has fallen to less than 1% of its original level. Overfishing, pollution, the presence of barriers to migration and deaths from hydropower plants are some of the factors behind this. The species is currently still in decline and is listed as “Critically Endangered” on the IUCN Red List.

Eel is one of the main migrant fish species in Europe. The species has European protection (EU Eel Regulation, 2007) because of the strong decline and as an indicator in the Water Framework Directive for brackish waters. In addition, the eel has a strong economic value.

The assessment of eel stocks requires a reliable method to measure the return of elvers. Traditionally, elvers are monitored manually with a dip net, but because this method is labour-intensive, these samples are often limited to snapshots.

With ELFI however, monitoring is continuous giving a good picture of elver migration at the site. This method also offers the possibility to investigate the behaviour of elvers around barriers. For example, how long do elvers keep looking for a passage? Or, how effective is the present fish passage?

The free migration of elvers is often limited by: